1951: took part in the Festival of Britain celebrations (as reported in IWA Bulletin No 27) although the ownership is attributed to Hercules Cycle & Motor Co Ltd of Birmingham and the boat was carrying an experimental cargo of bicycles that was hoped to become a regular traffic (which sadly it didn’t).

Possibly sold to T&S Element, and then to Messrs R B Tudor of Albion Wharf, West Bromwich, who renamed it Albion.

1967: advertised for sale by M E Braine, Norton Canes, following which a cabin conversion was fitted

David Pedley writes in 2011: My wife and I bought nb Albion in 1974 from a Mr and Mrs Walker. They had had it painted as Albion before they discovered it was originally Antares, and that the name had been changed when it was sold and went to work at Albion Wharf, Birmingham. We had it repainted as Antares.

The engine, a Lister marine diesel, was so appalling the boat was immobile a lot of the time we owned it, trying to get it to work properly as we couldn't afford a new engine. We lived for a while on moorings at Bull's Bridge, then  below Cosgrove Lock on the Grand Union. The boat got into a state of disrepair and we sold it in about 1977. I was told it was at City Road Basin for a while, but never actually saw it again.

mid 1990s: deteriorating badly.  The rotten bow was removed in 1998, and the remainder was later sunk near the Dukes Cut. 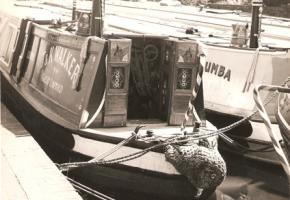