Possible original identities are EAGLE, CHUB, MULLET and SKATE.  There is a photograph of EAGLE in Robert Wilson FMC booklet, which appears to have a more upswept counter than AQUARIUS, therefore it is most likely one of the “missing” Fish Class boats.

EAGLE is known to still be with BWB in 1974, but was subsequently believed to have been scrapped.

CHUB was believed to have been scrapped by BWB in 1975.

MULLET & SKATE were both converted to “gunniting” boats by chopping off the bows and replacing them with a square punt-style front.  Both were eventually sold to Alan (Caggy) Stevens, Tipton.  It was generally understood that one was scrapped and the other became RUSSIA.

Whichever of the above 4 boats has become AQUARIUS, it now has as its bow the fore-end of a BCN day boat gauged BCN No 19833.  This was a boat named TOGO, built for T Marsh of Dudley, gauged on 2/8/1905 and subsequently sold to Eli Aston (Boatbuilder) of Tipton.

For photo details, click the i, top left on each photo 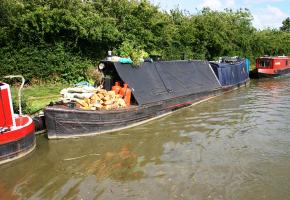 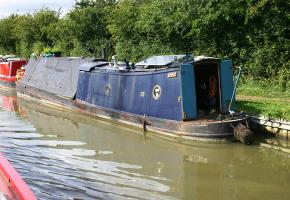