Monarch was built in 1908 at the FMC yard at Saltley, near Birmingham, of rivited iron as one of the FMC fleet of steamers. These vessels represented the first real change from horse hauled boats on the English canals to mechanical power. Various experiments with steam powered cargo carrying boats had been made on the canals in the late nineteenth century, but with little sucess. It was only when Fellows Morton & Clayton, who owned, by far the largest cargo carrying fleet, designed, built and introduced their steamers in the eighteen nineties did the demise of the horse drawn narrowboat begin. This small fleet of thirty two steam boats created the most significant change the canals have ever witnessed in their long history. When Fellows, Morton & Clayton designed their first steamer all those years ago. They used a normal 'Josher butty' hull but after a number of experiments realised that they would have to re-design the stern end and introduce a cavitation plate over the propeller. Hence, the first counter stern was developed and has lived until this day as the standard counter stern for all narrow boats, although you can recognise a steamer hull by the canted up stern to allow for the large diameter propeller.

The approach of a 70ft FMC Steamer, was immediately recognisable by it's stark black funnel invariably throwing out a plume of white steam which could be seen laying a trail across the fields whilst she was still a mile away. In those simple days they must have been a formidable sight, and possibly a foreboding of things to come, to the boatmen with the horse drawn boats. They were a mean and powerful machine being able to tow up to four fully loaded butty boats {the name of the original horse drawn narrowboat}. The steamer fleet used to operate from London to various centres in the Midlands and the north, non stop with immediate turnrounds having virtual right of way to any other craft. The boilers never went out. They carried an all male crew of four instead of the customary family on the horse drawn butty. The woman's colourful touch of decoration and polished brasses were absent. The steamers had no nonsense functional look about them with no brass bands around the funnel or stove and minimal painted decoration.

This significant era of steam on the canals was short lived as by the mid-1920s the more compact and economical diesel engine took over as the main motive power. It took up half the engine space allowing for more cargo and a man and his wife could again handle the boat. By 1925 most of the 32 steamers had either been scrapped or converted to diesel. Only a very few have managed to survive to the present day. Although they can no longer be easily identified by the unmistakable black funnel which disappeared seventy years ago when they were converted to diesel, the experienced eye can spot an ex steamer by the fine Josher bow and the canted up counter stern to allow for the enormous 34 inch diameter propeller. But it is a very rare sight!

Her Majesty, Queen Elizabeth II, once visited Monarch. On reaching the boatman's cabin, where a joint of roast beef was cooking in the range, she declared "How amazing". It has never been established whether or not it referred to the roast beef or to the boatman's cabin! Apparently any reference to cups of tea and Typhoo are not fact. 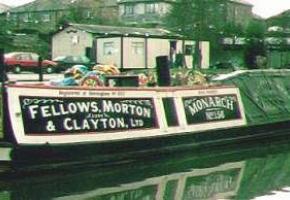 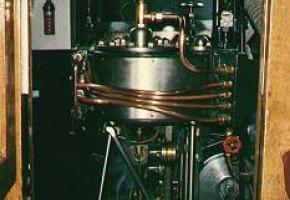 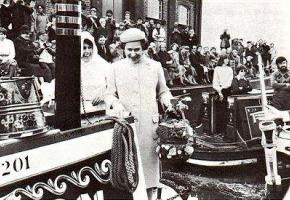